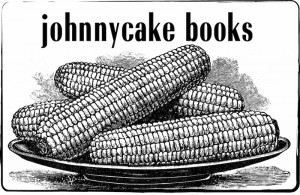 Johnnycake Books is an internet and storefront bookseller of rare and collectible books. We were one of the first several hundred booksellers to put their collections on-line in  he mid-1990s. We opened our shop,  which resulted from our internet success,  in 2000. It's located in the small town of Salisbury in northwst Connecticut, in the foothills of the Berkshires.  The bookshop is housed in a 19th-century farmer’s cottage surrounded by perennial gardens,  Johnnycake Books is a place for relaxation,  perusal, and acquisition of the personally curated volumes in our collection.

It’s a simple corncake that harkens back to old New England Yankee kitchens.

There are two reasons, one personal, and the other literary. There is a Johnnycake Hill that overlooks the harbor in New Bedford, Massachusetts, where the store’s owner Dan Dwyer grew up. Johnnycake Hill is also the place in Herman Melville’s Moby Dick where Ishmael finds lodging, worships, and from which he departs to go a-whalin’.

Dan Dwyer brings a varied background to rare-book selling. After graduating from Georgetown University in 1974, he worked on Capitol Hill and Jimmy Carter’s 1976 campaign. He then served at the White House, traveling worldwide with the press corps. Next, he worked for CBS both in Washington and New York. When he moved to Salisbury, he sold real estate and ran for public office before discovering the happy pursuit of rare books.